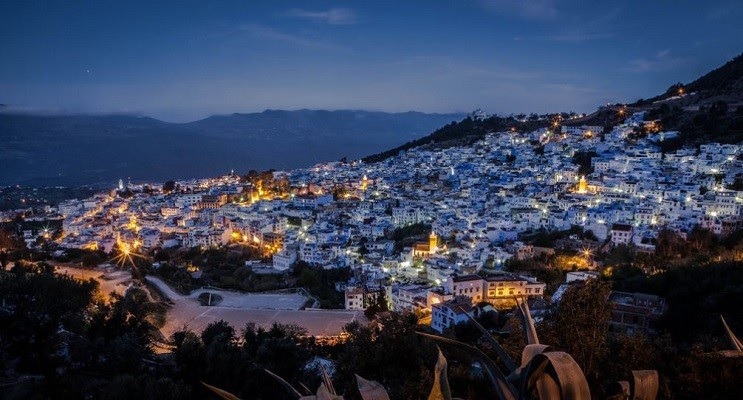 This Moroccan city located in the mountains of the Rif served in the 17th century refuge and house to the Moorish escapees of Andalusia.

Chefchaouen means horns in Berber, because that is the shape of the mountains that surround it. This famous city was founded in the 15th century by an Andalusian oligarch, Moulay Ali ibn Rachid, escaped from Spain. The story of Chefchaouen is strictly linked to the decision to expel Muslims from Andalusia taken in the fifteenth century. by the Catholic Kings, Isabella of Castile and her husband Ferdinand II of Aragon.

Today Chefchaouen is divided into a medina and a new city, built by the Spaniards who occupied this land in the years 1920-1956, during the French protectorate. It is good to walk in the winding streets of the medina, winding between the colorful houses. The most common color of houses is white but each building is painted blue up to a height of 170 cm. The houses are repainted every year, which allows to revive the colors faded by the sun. This landscape is completed by the bare peaks of limestone mountains surrounding the city on one side, and covered with lush vegetation on the other.

In the center of the medina, we find the old fortress, the kasbah. Its interior, created according to European trends, hides a beautiful garden where tall palms grow as well as figs and roses. It is an exotic oasis and an Andalusian paradise in the heart of the city. If you cross the garden, you come to the old prison where chains are still attached to the walls. One of the rooms of the fortress was converted into a small museum with matrimonial thrones and musical instruments from Andalusia.

A few years ago, every inhabitant of Chefchaouen cultivated his small field which allowed him to earn a living. Next to the house, he had a small pantry to store products such as wheat, dried fruit, garlic or olive oil.

Two colorful festivals attract musicians from all over Morocco. During the festivities, the streets of Chefchaouen become the scene of concerts, music or theater performances and numerous activities for children and adults.

The Andalusian Music Festival is a kind of competition in which musicians and groups from all over the country participate: folk groups, folk musicians or even female choruses. The musicians most often represent cities like Rabat, Tetouan, Tangier, Fez, Safi, Oujda or Chefchaouen. The festival is organized in late spring or early summer (May, June or July) and lasts for three days. On the program, there are also theater performances and performances by guest artists from abroad, p. ex. from Spain, or from France.

The International Chefchaouen Festival Alegria Achamalia is organized in the first half of July. Its aim is to promote the city and its culture, art and nature internationally. The streets of the city are the scene of concerts, shows and dances. At this event featuring local, national or foreign musicians, there are also fashion shows. In a way, the traditional outfits of the Chefchaouen region reflect the lifestyle of the women who live there.