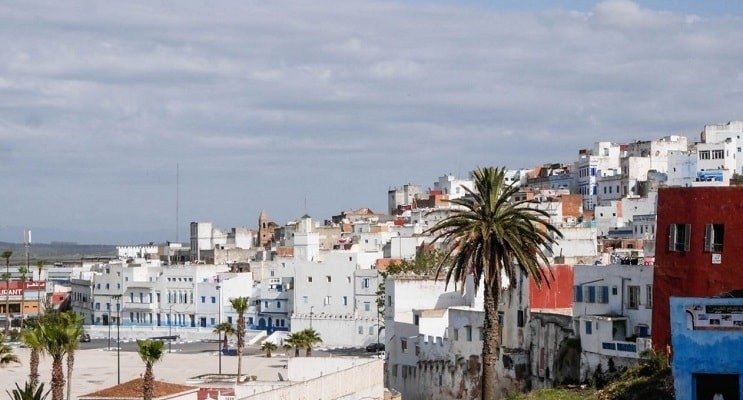 Larache knew how to defend himself from the mass tourism and always allows to feast of the silence and the blissful nap Mediterranean. The Phoenicians founded a commercial port in the Lixus colony. The location proved so beneficial until the end of the fifteenth century.

Lixus, and then Larache founded near its ruins, was considered one of the most important ports of Morocco. In the 2nd century BC. BC, the Romans succeeded the Phoenicians. As a reminder of this time, there are nowadays vineyards that, although wild, are still an important part of the landscape. It was to these vineyards that the Arab tribe Beni Arouss, who was present on these lands, founded a new town near the devastated settlement of Lixus, which called El Araich (vineyard). The Portuguese living in Tangier Asilah looted the city and expelled the Arabs.

The aid came from the Sultan of Fes, Mohammed Ech-Sheikh, who built a huge fortress near the Lakkou River and fortified the port. It turned out that neither the Portuguese nor the Spaniards nor the French were able to conquer the fortress which was taken only by the pirates, to which it served as a seat until 1610, when it was taken back by the Spaniards. It was only in 1689 that Sultan Moulay Ismail recovered the city for the benefit of Morocco At the time of the French protectorate in Morocco (1912-1956), Larache was ruled by Spain, whose culture permeated the city.

Today, we often hear Spanish spoken on the streets of this modern city, counting approx. 100,000 inhabitants. There are institutions promoting Spanish culture, such as the Association of Moroccan Writers in Spanish Language (AEMLE). The picturesque streets resemble those of the cities of the Iberian Peninsula.

In the ornaments and architectural solutions, dominates the Andalusian style, constituting a mixture of Spanish and Moroccan styles. The creator of the theater of the absurd buried in Larache The old Larache Spanish cemetery is the resting place of Jean Genet: genius and compulsive pickpocket. Very experienced by fate, Genet is regularly imprisoned for more or less important sights.

In prison, he writes and publishes his books. Recidivists and homosexual, he incurs a term of imprisonment for life. And it was at this time that Jean Cocteau and Jean-Paul Sartre discovered his talent. Famous writers defend him in court and, thanks to their influence, in 1949, obtain his acquittal. Jean Genet lived in Morocco, which enchanted him like many other writers. There he met the man of his life and lived there his last years. Although he died in Paris, his body lies in Larache's Spanish cemetery.

In the heart of the city, the Place de la Liberation is presented with its many cafes and restaurants (to recommend including fish). There is also an imposing door, Bab Khemis, constituting the main entrance to the medina. Life in the old city is concentrated around the souk Esseghir, called the little souk. It attracts by its diversity of nights and vegetables, exposed on the stands along the main promenade. But once in the medina, the best is to get lost, because the strolls in its winding streets allow to discover picturesque passages and houses with original and colorful entries.

It is also interesting to visit the small fishing port east of the Liberation Square, or to rest on one of the beautiful beaches near the city both located approx. 400-500 m from the center, at the mouth of the river (Lakkous). You can go on board a boat leaving the port. Two beaches particularly deserve to be recommended. The first, at the edge of the ocean, will particularly enjoy surfers, given its high waves. The second, located on the banks of the Lakkous River. Is separated from the Atlantic. Lixus The major attraction of Larache.

The ruins of the ancient city of Lixus are 7 km north-east of the city center. According to the mythology, it is here, on the banks of the Lakkous River, that King Anté's palace is located, surrounded by the famous garden of the Hesperides nymphs guarding the apple tree which gave golden fruit. The apples were stolen by Hercules by order of the goddess Hera: thus the hero realized the 11th of his 12 works.

The Phoenicians founded the first port city of North Africa. However, the megalithic stones encountered near the Acropolis may mean that the settlement took place before that date. Also the name Lixus, used by the Phoenicians and meaning the City of the Sun, can be related to the culture that developed there even before their arrival.

The city came under the authority of the Numidians and then the Romans. The city prospered a lot and was one of the most important urban centers of the Roman province of Mauretania Tingitane. However, as soon as the emperor Diocletian deprived Lixus of the protection of Rome, the city became impoverished to be completely emptied.

Today, there are ruins of ancient houses and temples decorated with mosaics and stuccoes. Among the preserved buildings, there are, among others, vestiges of the Roman baths with the famous mosaic representing the demonic head of Poseidon characterized by its enormous eyes - wide open a light blue and its. Language pulled. From the impressive hair of the god of the waters and oceans, you can see little crab legs.

We learn a lot about the history of the city with the ruins of its 10 production halls and 147 pools, where were stored (pickled fish elements which were then made the favorite sauce of the Romans, the garum Or, at the time romaine, the city, specializing in fish processing, was part of the Mediterranean economic system based on the manufacture of olive oil and fish-based preparations, including garum.