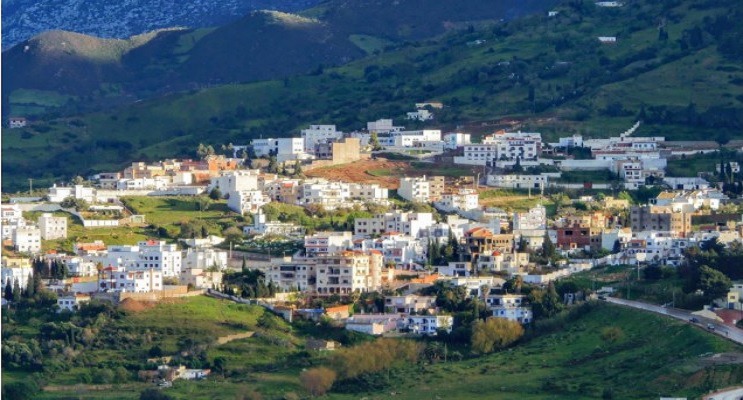 Built on a cliff, the city seems to flow like a cascade of houses flowing in the waves of the Mediterranean. The bay in which Al Hoceima is located is surrounded by the Rif mountains plunging in azure water.

Al Hoceima is a small port city of 55000 inhabitants. It is located in a bay surrounded by a limestone massif, Bokkoyas, and a block of volcanic rocks, Beni Bou Idiz. It offers an exceptional view of the Mediterranean, especially from the road leading to the village of Ajdir, from which you can see some rocky islets in the bay. One of them, Penôn de Alhucemas can boast of a fifteenth century Spanish fortress. preserved until today and impressive especially in the evening, given its beautiful illumination.

In the Middle Ages, Al Hoceima was an independent country called the Emirate of Nekor (named after the river that passed through the village at the time). The region was dominated by Abd al Krim, leader of the anti-colonial struggle and president of the Republic of Al Rif. He succeeded in uniting the Moroccan tribes of the Rif mountains and proclaimed in the north of the country the Republic of the Independent Rif. Today, Al Hoceima is a place where tourism is the main source of income.

In search of uninterrupted rest, we arrive at the small beach of Quemado; Quaintly located between two cliffs overlooking Al Hoceima Bay, a eucalyptus forest and Quemado Beach.

The second Spanish exclave (the first being Ceuta) is a very luxurious place that, by its character and architecture, is more European than African. It is for this contrast that it is worth to visit Melilla.

Melilla, like most port cities in Africa, was founded by the Phoenicians in the 2nd century BC. BC. J.C.

Then she was conquered by the Carthaginians and Romans. The city remains under Spanish rule since 1497, all attempts by Moroccan sultans to resume it having been in vain, including that of 1956 following the end of the Franco-Spanish occupation. Melilla has a medina and a contemporary part, built in the 20th century.

The new city has spacious arteries and a large municipal garden: Hernandez Park. Its main axis, 1 Avenida Rey Juan Carlos I, is where most of the shops are located.

Surrounded by a wall, the old Aille is on a promontory. The most important buildings in the medina are the 15th century stone fortress. and a Catholic church. In the most advanced part of the promontory in the sea, there is the municipal museum (Museo Municipal) with Roman and Phoenician remains discovered around Melilla, such as vases or coins. The Phoenician jewels of the collection have ornaments typical of the art of the Sahara region, which testifies to the great expansion of the Phoenicians. Among the most interesting objects, there is a bottle of the Roman era in the shape of a small dog. There are also examples of Spanish or Arabic armor. It is advisable to finish the visit of the museum on the terrace offering a panorama of the city, the coast, the port and the Cape of the Three Forks.

The city is located in a dry, mountainous and hostile region, but life in Oujda has a quiet rhythm. It is interesting to visit the traditional market but be careful not to get entangled in the threads used to make multicolored fabrics.

The city is 13 km from the Algerian border, on a trade route from two rich cities, Meknes and Fez, to the ports of the Mediterranean. It is a dry region, cut off from the mild Mediterranean climate by the Rif mountains. But these difficult conditions do not scare xerophytes (plants adapted to dry environments). In the neighborhood of Oujda, we find the alfa, a species of esparto, a xerophytic herb also known as needlegrass. It is exported in large quantities to Great Britain where it is used for the production of satin paper or is used by local artisans. They intertwine threads in wool, from which they make blankets or carpets, or use them to make ropes, baskets or sandals.

Oujda was founded in 994 by nomads fleeing the Arabs and their new religion. A century later, when the Almoravids founded Marrakech and, led by Youssef ben Tachfine, began to conquer the northern territories of the country, Oujda was within their perimeter. Since then, she has been regularly devastated and rebuilt, through periods of prosperity and totality. But locals remember the fear of the invader.

The city was invaded by multitudes of workers. Today, Oujda has more than 300,000 inhabitants living mainly in contemporary residential neighborhoods surrounding the medina. The old town is typical.

The city was invaded by multitudes of workers. Today, Oujda has more than 300,000 inhabitants living mainly in contemporary residential neighborhoods surrounding the medina. The old town is typical with its labyrinth of narrow streets and traditional souks. The most interesting of them, kessaria, offering clothes, is spread over a small square surrounded by arcades. At the end of the square, on the right, there is a modest courtyard where the dyed wool is rolled into skeins. His multicolored threads form a rainbow of linen.

In the shade of the trees, at the crossroads of the streets of the medina, El Attarine square is presented. It is a popular resting place with a small bar where you can enjoy coffee, tea or freshly squeezed orange juice. If you cross the square and take the Chadli street, you come out of the medina by the monumental Bab Sidi Abd el Ouahab Main Gate. Under his bow, the governors of the city made hang the heads of criminals and those of the rebels or leaders of mountain thugs, whom they considered trophies.

The Beni Snassen massif is part of the Rif Mountains. Its wooded flanks extend north-west of Oujda and south of Berkane. His name refers to Berber tribes who lived there before the expansion of the Arabs. After the invasion, the mountains were an ideal shelter for the Berbers who did not want to convert. The Béni Snassen massif separates two regions: Angad, in the south, with its dry and rocky plains, and Tiffa, in the north, fertile and well irrigated by the Moulouya river which allows to cultivate wheat, cotton, vines or citrus fruits.

The best and most comfortable, the road N2, leads from Oujda to Tangier, After approx. 55 km, in Berkane, take the narrow P60I0 towards the Zegzel Gorge to the south. The road leading through the Beni Snassen massif is 170 km long and very scenic but, because of its narrowness and many turns, quite difficult too. The highest peaks reach 900-1400 m. The getaway is only possible if it is very beautiful, from May to September (party, temperatures reach 28-30 C). Outside this period, the road may be extremely dangerous, covered with ice, snow or flood.

The trip to the Beni Snassen massif not only allows you to admire beautiful landscapes, but also to know the daily life of the inhabitants of the surrounding villages. On the road, we always meet locals carrying their goods on the back of a donkey or shepherds with their flocks of goats and ewes. Villages surrounded by terraced fields hide behind the turns. It is not surprising that from time to time we are stopped by men with plastic jerricans. These are traveling petrol stations and the cheap fuel sold by these men comes from smuggling.

At the end of the road, the Zegzel Gorge, 15 km long (about 8 km from Berkane). Offers beautiful views of vast valleys covered with olive groves and fruit trees, such as orange trees planted on terraced fields. Then, the path climbs to the top of the massif, where, in good weather, you can see not only the whole valley of the Moulouya river but also the Mediterranean coast.