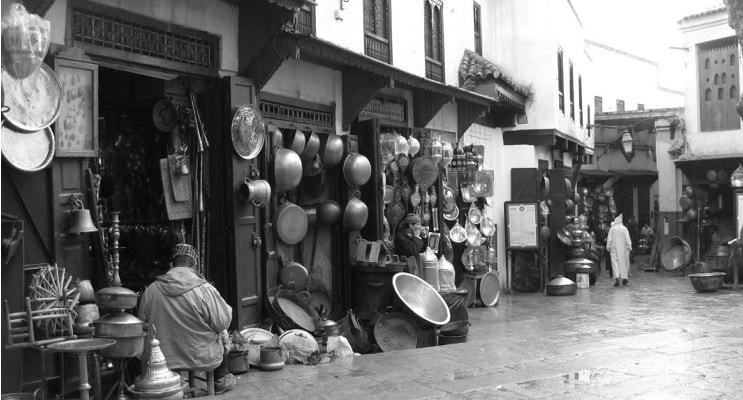 Travel in the past

Tourists visiting Fez sometimes have the impression that time has stopped there centuries ago. The old city of the 9th century. and the Jewish quarter of the 15th century. were inscribed on the UNESCO World Heritage List. They offer not only high-end monuments but also allow to have an idea of ​​the life of the Arabs in Morocco at the time of its splendor.

The name of the city comes from Arabic which means pickaxe. The gold and silver tool was offered by the Berbers who lived there to the founder of the city, Idriss I, the first Muslim ruler of Morocco, his son and successor, Idriss II enlarges the city and chooses it for its headquarters and as capital from the country. Fez then became a military base, naturally protected by the mountains of the Rif and the Middle Atlas.

A crucial episode for the city, the arrival of the two sisters of Kairouan in Tunisia, Fatima and Meryem el Fihriya. In 856, Fatima founded the El Karaouiyne University in Fes, considered the first in the world, and Meryem founded the Andalusian mosque. Fez then became the intellectual capital of the Arab world and one of the most important cities of northwestern Africa. Its oldest part, surrounded by clay and stone walls, that is to say its medina, is called Fes el Dali. Its dense architecture consists of whitewashed houses with no windows on the side of the street and flat roofs, often used as terraces.

Fez lived his golden age in the fourteenth century, under the Merinid dynasty (124S-1465). Many koranic schools were then created, the university el Karaouiyne developed and a new district, Fez el Jedid, was built, which today composes with Fez el Bali the Old Fez. It was precisely in Fez el Jedid that the palace of rulers and the first Jewish quarter of Morocco (mellah) was created. Two centuries later, Morocco's rulers chose Marrakesh as their seat. It was not until the 19th century. that Fez was named the mother of all the Moroccan cities and became again the capital. The arrival of the aristocracy increased the prestige of the city. At the end of the 19th century, when Morocco suffered an economic crisis, Fes lost its position and the capital of the country was transferred to Rabat. The country found itself under the Protectorate of the French Republic (1912-1956).

The new city is often called French city. There are many bars, elegant pubs or clubs imitating the European style. The main artery, the prestigious Avenue Hassan II, is the longest promenade in Morocco with its 3 km of fountains, sculptures, marble benches and palm trees arranged in espalier, it is the place of rest preferred they walk there meet friends and sit in bars or cafes for ice cream, milk and fruit cocktails, coffee or mint tea.

The cultural differences between the new city and the medina are quite important. In the new city, Moroccans and Moroccans wear jeans and t-shirts while in the medina, considered the bastion of the Muslim tradition, this type of outfit is not adequate. In the old city of Fez, everyone wears djellaba (traditional Moroccan dress tunic) and women hide their hair under veils. On Friday, the corresponding day in the Islamic world on Sunday among Christians, the medina becomes deserted and silent. Workshops and shops close. The men, dressed in white, go to the mosque while the women, who stayed at home, prepare the traditional Friday dish, couscous (durum wheat semolina with a vegetable sauce cooked with lamb or beef). The closed houses and workshops then resound with recordings of imams reciting the Koran. Five times a day, by calling the faithful to prayer, the muezzins make the beauty of their voices heard. They sing from the top of towers of more than 280 mosques spread in the medina. The atmosphere of Friday is also felt in the streets around the mausoleum Moulay Idriss where, in the absence of room in the temple, the faithful stop to pray. That is why it is forbidden to come into the grounds surrounding the mausoleum accompanied by pack animals, the presence of which could constitute a risk of pollution of the streets by excrement.

In the narrow streets of the medina, it is possible to transport the goods only by donkey or mule, which is the best way to supply the shops and factories of the city with products. Passersby give way to the animals and their guides shouting in Arabic: * Jhilak, balaik! Which means "Attention I". In the streets, there are also children running with trays placed on the head and carrying ha pale for the manufacture of bread, The cooking is done in bakeries, because the houses, built mainly of cedar wood, for reasons safety, are deprived of large furnaces that are replaced by gas ovens. Given the customs prevailing in the medina, the outfits that are worn, the methods of handcrafting practiced or the appearance of houses, one has the impression that it has not changed anything since the 9th century.

The medina of Fez is full of original souvenirs of Morocco and the objects are sold there are handmade by craftsmen of Fez. The crafts of Fez (about 30,000 families are involved in the crafting of everyday objects) the textile industry or the processing of fruits and vegetables.

The mere fact of being able to rummage through the small craftsmen's stores, whose assortment resembles Ali Baba's treasure, is a tourist attraction. You can see craftsmen working leather moroccan slippers, leather travel bags. Near the madrasah Bou Lnania, you can make bronze articles, plates and jewels engraved by hand or in alpaca (teapot typical of Morocco). Moroccan hand-woven carpets and blankets made of natural sheep and camel wool are sold near Seffarin Square. In the Chouwara tannery leather goods, babouche, traditional Moroccan shoes, leather handbag leather jackets, leather belts and Moroccan slippers are made. Near tanneries there are manufactories where fabrics and fabrics made of agave yarn (called vegetable silk) are woven.

The Medina of Fez is a labyrinth of more than 9000 narrow and paved streets, with a total length of 90 km and leading to approx. 14000 buildings. Good to know: some street names deceive the tourist instead of guiding him.

The streets of the medina are like children: they like surprises. They play with the tourists at Colin-Maillard by disappearing at a corner or a turn, flee zigzag or snaking to return and get lost in a small place. They hide behind a donkey, a child carrying bread dough or a trimmed man heading for the mosque.

Where to go? How to find the right path? After a stand or a turn, we may not recognize the path by which we came, because he may have changed his name as to better deceive the tourist. In the medina, the rules are different and the streets seem to lead their own lives. The name of the street may change depending on the neighborhood it passes through or the type of craftsmanship.

Like the Eskimos who use several terms to designate snow, the Fassis have several names to describe the types of streets in the medina. Thus, there is the Talaa that one could compare to an alley, p. ex. Talaa Kbira or Talaa Sghira. Then there are short alleys, often dead-end, called derbs and many others who owe their names to a known building they lead or to a souk they host regularly.

It is difficult to orient, as the names of the streets suddenly disappear without the street itself turning, being cut off by another or ending. This is so with one of the main streets of the medina, Talaa Kbira, which leads from Bab Bou Jeloud to the university el Karaouiyne 090). A dozen meters after Bab Bou Jeloud, it becomes Cherabliyin (named after a mosque), then Terrafine and finally Attarine (also named after a mosque) leading to the university gate.

Is there a way to move effectively in the medina? The Fassis advise to lose there. According to them, one finds the right way only after being completely lost.

This festival of gourmets, fine connoisseurs and chefs takes three days. The festival attracts an international audience in which some come to cook and others to feast.

The Festival of Culinary Art has been organized in Fes since 2006. It attracts chefs from all over the world who come to exchange experiences, research the origins of dishes or experiment with different flavors. During the festival, they work in their workshops (organized in the kitchens of selected hotels) and then, serve the prepared dishes to those who have bought tickets in the selected restaurants. Thus, one can taste desserts, appetizers, regional dishes or innovations of the chefs.